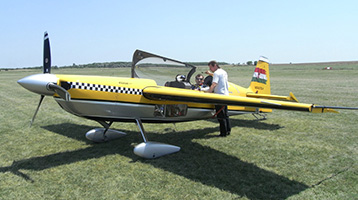 Tamás Illés in Matkópuszta and Foligno

We started the interview with aerobatics world champion Tamás Illés in the summer by making a video at the Matkó Cup and finished it last week also adding our report on the world championships in Italy in the autumn.

What happened after the second day of the competition?

As I already told you during the video interview, after winning the Q and losing the free session due to a drawing error, I succeeded in winning the first unknown programme.

However, during take-off for flying the second unknown program, the plexiglass of my cockpit was fully covered with engine lubricant, due to which I almost had to do an IFR landing after the safety figure. As it turned out, my mechanic had forgotten to re-tighten the dipstick and it became loose as a result.

The problem was aggravated by a crack revealed during the compulsory technical inspection at the mounting of the undercarriage on the fuselage frame due to which I had to give up the race. I am very sad because based on my performance I could have won the cup but this sad outcome was a good lesson and a promising one for my preparations.

In September you flew at the World Championship in Italy.

At this competition, I finished on the 16th place in combined from a total of 52 competitors.

I can say that it is a great result for a Hungarian to be in the top 20 in the Unlimited category because eighty percent of the pilots here do this sport on a professional basis. We have not seen such a good result since Péter Besenyei.

As for me, despite all this, I expected more from myself. I wanted to be in the top 10 in combined and finish on the podium at least in one round, and I did have a good chance for that based on my training and preparations.
Every tiny detail counts here because individual performances are very close to one another and, similarly to other sports, everybody is getting more and more prepared and professional year by year.

Follow-up analytics with my trainer and with our Hungarian FAI referee have shown that I could have achieved a better result with my flying performance if
– I had been or flown closer to the referees
– the aircraft had a more proper colour for visibility. Unfortunately there are too many silver and metallic colours on it which makes it less visible to referees in case of sun shining through a cloudy sky.

Learning the lesson from this experience, we are getting prepared for the next year because I am convinced that we are capable of more than this.