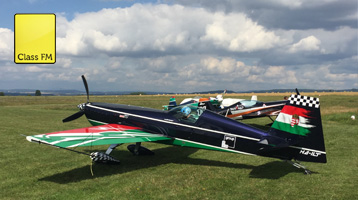 The most prestigious aerobatics event in 2014, the European Championship was held in Kecskemét, Hungary this year. 52 pilots from 14 countries signed up for the event which was one of the topics of Wednesday’s “Class Kultúra” radio programme, whose guest was the aerobatics world and European champion, Tamás Illés.

According to his data on formula.hu, Mr. Tamás Illés has been a long-standing participant in car and motor racing both in Hungary and abroad. Back in 1995, he was an autocross racer and one year later he also drove a BMW at the Hungarian Touring Cars series, so he competed in two series at the same time. In 1997 he won the Hungarian Touring Car Championship as well as the FIA European Championship, for which he received his trophy from Max Mosley. In 1998 he moved to the Open Formula by Nissan 2000 series, where he spent three years vying for the scores against big champions like Fernando Alonso and Marc Gené. Then in 2000 he decided to join the FIA GT World Championship, first as a stand-in only, but he immediately secured a podium placing after the race at Hungaroring. In the following season, he already competed at 6 races.

“I’m very proud of my achievements in tour car racing. At the F1 racing track at Hungaroring nobody has been able to beat my track record until this date and I believe it is also a big achievement that it was me who got to the furthest as a Hungarian pilot in international competition before Norbert Michelisz” - says Tamás Illés who really has a lot to be proud of.

He started his aerobatics career in the 2000s, as a result of a brief guest flight with Péter Besenyei back in 1997. Shortly after finishing his car racing career, he started to learn flying. He finished on the third place with a Zlin 50 at the Hungarian Championship in 2004, and the year 2007 brought his first major international success when he won the European championship title with his “unknown compulsory” programme and the silver medal in combined. He repeated this result at the world championship one year later, in 2008. “Unknown compulsory program means that each team proposes a sequence they learned and the jury puts together the flying program from these. You cannot exercise for this, only in your head. The first exercise is the competition itself" - said Tamás